Arts
One of the distinct characteristics of Laos is the diversity of its people and cultures. The country’s culture is heavily influenced by its neighbors, with a trace of Khmer, Thai and Vietnamese culture which is apparent in their arts, architecture style, cuisine, literature, music and sculptures.

Theravada Buddhism has a prevailing influence on Lao culture, evident to the country’s architecture in which is often religious in nature. Pha That Luang, the “Great Sacred Stupa” in Vientiane is one of the most notable structures in the country. It is considered to be the most important religious edifice and symbol of Lao independence and sovereignty since the time of Lan Xang. Built in the 16th century under King Setthathirat, Pha That Luang consists of a central stupa with three levels each conveying a reflection of part of Buddhist doctrine. The encircling walls contain a large number of Lao and Khmer sculptures. The glided structure of this imposing stupa reflects marvelously in the sunset.

During the Thai invasion in 1828 the structure was heavily damage and left abandon. Louis Delaporte, French explore and architect came across the abandoned temple and made detailed sketches of the temple. The stupa was restored to its original structure in 1930s with the guidance of the French.

Lao’s architectural styles can be distinguished to the geographical location of the temples and monasteries. In Vientiane, the wats are built with large rectangular structures constructed of brick and covered with stucco and high-peaked roofs. The roofs of the wats built in Luang Prabang are sweep down almost reaching the ground while in Xieng Khouang the wats roofs are not tiered.

Another example of Laos distinctive art is the religious images known as “The Calling for Rain” posture of Buddha image which illustrates the Buddha standing with his hands held firmly at his side, fingers pointing to the ground.

Laos is known for its weaving. Most of the women in small villages of Laos weave cloth of cotton or silk. Distinct weaving techniques are exhibited by different ethnic groups in different regions of the country. Most of the traditional designs have a mythological motif or animal that pertains to certain ceremonies or festivities in the country other designs include geometric patterns or temple motifs. Weavers arduously choose elaborated brocade patterns, making scarves, shawls, traditional skirts, household decorations, and blankets.

Very little is known concerning the history of Lao’s literature due to decentralization and isolation of the early society. The first recorded Lao traditional literature was from 15th century and 16th century. Most of the written literature has a Buddhist religious theme, or historical documents. Most famous of which is a classical interpretation of the “Ramayana”. However, popular literatures are maintained by oral tradition of folk tales. The country has a long tradition of oral literature, including children’s stories, folk tales, parables, poems and proverbs.

Oral Literature is narrated through lengthy poems that can last up to six hours. Folk literature is amusing and varied with several types of myths which are both in poetry or prose and most of them are considered scared. Some of the folk literatures of the country were recorded on palm leaf manuscripts due to the belief that copying books is a way of making merit of giving away knowledge.

Lao literature boasts three masterpieces – the Vetsantrasadok, the most popular among the three, it relates life of Buddha before his enlightenment; the Sin Say or Khun Borom, a story of the first human king sent from heaven to lead Lao people to prosperity; and Thao Hung, is a historical epic recounts the struggle between ancient ruling families during the Lane Xang dynasty.

Another important Buddhist literature in Laos is the Dhammapada. It is actually belong to the Theravada school of Buddhist tradition. Dhamma means truth while Pada means way, so the Dhammapada means the way of the truth. The book is originally written in Pali and contains 423 verses of teaching within Buddhism, guiding voice along the struggle-laden path towards Nirvana.

There are also collection of palm leaf manuscripts of folk medicine and remedy collection that explain the medicinal herbs and ways how to heal or cure symptoms. Words of incantation as well as rituals to heal sickness are also included in these manuscripts. One good example is the folk medicine for longevity. In order to live longer one must prepare the following ingredients such as 108 myranbaran fruit, 108 wild phyllanthus emblica fruit, 108 diospyros mollis fruit, 1200 g of the root of solenospermum wallichii (Kurz) Loes, 300 g of hot chili peppers, 150 g of salt, 2400 g of ginger roots, 300 g of peppers and 300 g of sugar and marinate these ingredients in whiskey to be taken in the morning and in the evening.

Lao rhymes has four major forms in poetic conventions – kaap, a form of Laos rhymes to be read loud and mostly sung in various occasions particularly during Boat-racing or Rocket Festivals; Kon, has a specific rhyming pattern, seven syllables in the middle of a line with external and internal alliterations and rhymes; Khong, is another type of Lao rhyme which syllables are interconnected between the lines; and the Saan, can be in form of poetic prose or in verse.

Laos has a highly diversified musical heritage among its numerous ethnic groups. Lao traditional music can be divided into classical and folk. Traditional classical music is closely related to the Siamese. Sep Nyai is a form of ceremonial and formal music that is being played with sets of gong, xylophone, oboe, kettle drums and cymbals. Sep Noi is another form of classical music capable of playing popular tunes including two-bowed string instruments, the So U and So I. Folk music or Lum may not be written down but is played from memory and usually accompanied by Khen (a free-red instruments with a vibrating reed fitted in each pipe,) buffalo horns, tam tam drums, two-string violin and xylophone.

Festivities in Laos are usually link to agricultural seasons or Buddhist holidays. The Phi Mai Festival or Buddhist New Year is considered to be one of them most significant celebration in the country which takes place in the mid-April. Boun Ban Fai (the Rocket Festival) is being celebrated to entice the rains to fall, this usually take place during the later month of May. During the celebration plenty of processions occur with music and dancing, accompanied by firing of bamboo rockets to prompt heaven to send rain. During the month of November Tat Luang Festival occurs. This is a week-long celebration with range of fireworks, music and parades. Hundreds of monks gather in Golden Stupa to pray.

January – Boun Phavet, commemorating Buddha’s reincarnation
February – Boun Makha Bu-sao (Full Moon), celebrates the first ever sermon of
Buddha after his enlightenment.
March – Boun Khoun Khao, harvest festival celebrated around the wats
April – Boun Phi Mai, the Lao Buddhist New Year
May – Boun Bang Fai, the well-known rocket festival; Visakha Puja
celebrates the birth, death and enlightenment of Buddha.
June/July – Khao Phansaa the beginning of the Buddhist lent
August/September – Boun Song Heua is the boat racing festival which marks the
end of the rainy season
October – Boun Ok Phansaa is the end of the Buddhist lent and the three
month retreat of the monks. During this time boat racing in Vientiane is being held.
November – That Luang Festival, a week-long festival throughout Laos held
during the full moon of the twelfth lunar month.
November/December – Hmong New Year festivities takes place in the villages in
Northern part of the country. Lao National Day also celebrated on 2nd of December. 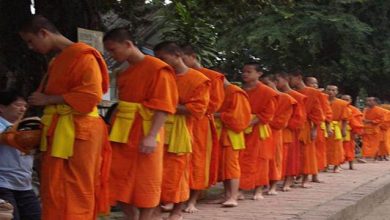 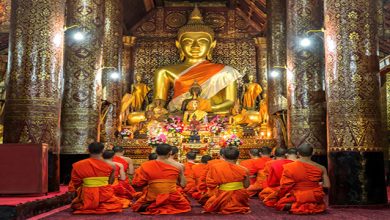 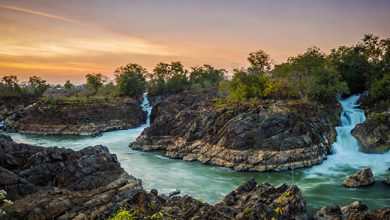 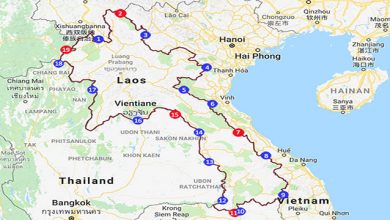