Lying along the banks of the Mekong River opposite Mukdahan Province in Thailand is Savannakhet Province. Savannakhet is the most populous province in the country and has a total area of 21,774 sq km which stretches the width of Laos from Vietnam to Thailand.

As of 2005, the province population reached 824,662; there are twelve ethnic groups in the province including Tai Dam, Phoutai, Kapo, Kaleung, and Lava. Almost two-thirds of the total population belongs to the Lao Loum ethnic group. The province strategic location serves as a major trading route in the southern part of Laos. The opening of the 1600 m Second Friendship Bridge that connects Savannakhet to Mukdahan creates a direct access to Thailand and opens business opportunities for all economic sectors in Savannakhet.

The town of Savannakhet was established in 1642 by Lao prince, Thao Keosimphali. The Prince brought many families from Ban Phonsim to reside along the bank of the Mekong River. In 1883, during the French occupation Savannakhet had been recognized as a center of administration and commerce in southern Laos, numerous French colonial and Franco-Chinese buildings sprouted in Savannakhet.

The best way to get around the area is by foot though tuk-tuks are also available around the city. In the old quarter of Savannakhet are old French Colonial Structures. This small town along route 13 on the way to Pakse resembles a small French town with comparable structures surrounding a central market place.

The main tourist attractions in the area are the temples. About 15 km north of the Savannakhet along the Seno road lays the second most revered religious place in southern Laos That Ing Hang Temple, a very sacred site for Laotian Buddhist after Wat Phou ruins in Champassak. Built during the reign of King Sikhottabong to commemorate the areas where Buddha rested during his wandering 2500 years ago. The towering stupa features three terraces and a hallow chamber. At the base of the stupa is remarkable collection of Buddha images, relics buried deep beneath the stupa dates back several centuries. Every year, during the month of February or March thousands of devotees gather around the ground of the stupa to pay respect to Buddhism.

Another impressive site that can be seen in Savannakhet province is the 1000 year old ancient Khmer Empire ruins of Vat Heuan Hin, “Temple House Made of Stones”. During 500 AD the shrine was constructed to honor the glory of the Khmer Empire. The area is situated in Ban Dong, Dokmay Songkhone about 65 km south of Savannakhet.

Vat Sayaphoum is the one of the largest and the historic temples in the town of Savannakhet. The temple houses more than 200 monks and novices. The first monastery on the site built in 1542, and by 1896 renovation was done within the area and modern temple architecture reflects around this important center for Buddhist devotees and monks. The temple is a prominent Pali school placed on the banks of the Mekong River.

Another interesting attraction in Savannakhet province is the Dinosaur Museum. The museum is situated on Thanon Khanthaburi in Ban Sayaphoum, Savannakhet province. The Dinosaur Museum exhibits the Dinosaur fossils and data, about the four kinds of dinosaurs excavated in the region of Ban Tangvai 120 km east of the province of Savannakhet such as Saurpodes, Theropode, Iguanodon, and Psittacosaurus. In 1936, a French geologist Josue Heilman Hoffet discovered deposits of fossils of dinosaurs and fermur; he collected a number of other bones in the area as a proof of existence of prehistoric Laos. The collection of Hoffet were rediscovered by a joint Lao-French paleontological team in 1990 and discovered new remains of dinosaurs in the area which are all being displayed in the Dinosaur Museum.

A Classic wooden structures pillar of Ho Tai Pi Dok Library in Nong Lamchan village south of the Savannakhet contains a collection of ancient palm leaves manuscripts written in the ancient Bali-Sanskrit and Lao alphabets is another place to see in Savannakhet. 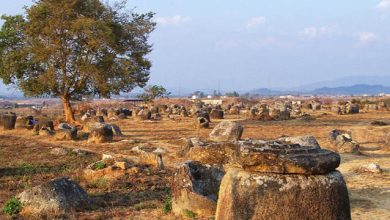 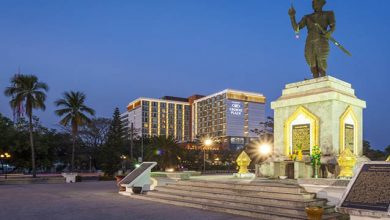 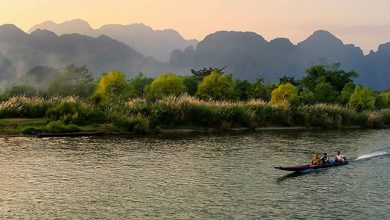 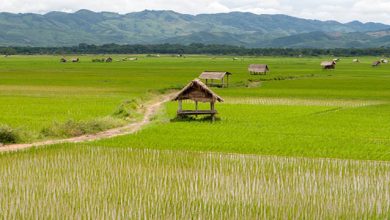