Town of Luang Prabang
The town of Luang Prabang is an exquisite ancient town situated in northern Laos. The town was declared as UNESCO World Heritage Site in 1995. It is an exceptional illustration of the fusion of traditional architecture and Lao urban structures with arrays of fine French colonial buildings built in the 19th and 20th century.

Luang Prabang offers a serene and gentle atmosphere that remains to be typically Laotian. The tranquil city of Luang Prabang serves as a home for hundreds of golden robe monks, countless ancient temples and well preserved colonial houses. Luang Prabang colourful night market displays a huge selection of locally produced handicrafts. The town’s daily routine begins early morning around six o’ clock with the traditional daily alms-giving ceremony. The locals as well as other people seat on the mat with food and wait for the queue of hundreds of Buddhist monks for alms distribution.

Luang Prabang was the former royal capital of the former kingdom of Lan Xang. It became the first administrative, political and spiritual city of the Laotian realm. During the realm of Fa Ngum Theravada Buddhism was brought to the city and by 1357 golden temples were constructed throughout the town. Despite most of these temples were destroyed during the attacks from pillagers, the temples were reconstructed in the 19th and 20th centuries and fantastic numbers of these temples still exist.

Administrative buildings in Luang Prabang were mostly built between 1910 and 1925. Its Metropolitan appearance is specifically designed in order to adapt to the climate. Colonial architecture as well as theme of Laotians religious edifices is seen all around the town. Colonial houses are a traditional Laotian architecture incorporated with French and Vietnamese design elements along with European and Chinese technical revolution. The old wooden houses of the royalty and aristocracy were transformed into masonry residences. The Luang Prabang National Museum was the former Royal Palace built during 1904-1908 is a good illustration of French inspired architecture that was known at that time. The elements of Chinese architecture were also introduced indirectly. Chinese-style shops houses in rows that faced right onto the street with lodges on the upper floors.

To suits the Laotian humid and warm climate, temples in Luang Prabang were built with secular wooden structures. Temples were inspired by vernacular temple architecture with sweeping tiers of the multiple overlapping saddle roofs reach closely to the ground.

Luang Prabang houses fourteen singnificant ancient temples including the most impressive and historically significant Vat Xieng Thong which stands on a point at the confluence of the two rivers. It is one of the oldest temples in Laos which origins can be tract way back 16th century. The temple was founded by King Setthathirat to commemorate the memory of the legendary king of Luang Prabang, King Chanthaphanith.

Vat Xieng Thong or the temple of the Golden City represents the classic Luang Prabang architecture. The sim (main building) has a low sweeping double-tiered roof and opulent interior and exterior gold-leaf ornaments. Embedded in its rear wall is the Tree of Life mosaic set on a red background made up of tiny pieces of colored glasses. Also within the ground of Vat Xieng Thong are more than twenty structures including pavilions, residences and shrines.

Another significant attraction in the town of Luang Prabang is Vat Mai. Vat Mai Suwannaphumaram or simply Vat Mai is one of the biggest, most scenic and photographed vats in Luang Prabang. Situated along the street of Sisavangvong, adjoining the compound of National Palace Museum, Vat Mai is the most splendidly decorated temple among the temples in Luang Prabang.

Founded by King Anourout in 18th century the temple served as a residence of the highest Laotian Buddhist dignitary and a temple of the royal family. The abbot of the temple also played an important role in the opening of Luang Prabang to the world outside Asia. In 1887 when Auguste Pavie, the first French vice-consul in Laos arrived in Luang Prabang the abbot invited Pavie to stay the monastery. During his stay he was permitted to scrutinize the extensive palm leaf manuscript of the monastery and used them to write the first comprehensive early Laotian history in a European Language.

The monastery main building has five-tiered roof with two solid redwood outer pillars once used to attach the royal elephants. The five-tiered roof vastness is clearly viewed from the adjoining elevated sidewalk on Sisavangvong road. The magnificent bas relief on the walls of the front veranda illustrates scenes from Ramayana, the Buddha’s penultimate reincarnation as well as the life in the village.

The oldest operating temple in the town of Luang Prabang is the Vat Wisunalat (Vat Vixoun). Built in 1512 during the reign of King Wisunarat the temple represents the earliest style of Lao temple architecture. The temple has a multiple roof in which the first two roofs range around the entire perimeter of the structure. The temple’s sim has numerous massive wooden beams, window placement and style of roofs, although the major part of the structure was made of brick and plaster instead of wood. It was elaborated by two additional gable roofs and inside the temple is gorgeous ancient statues and steles- stone slaps with a primed exterior showing an inscription often located in front of a building or monument.

Another prominent feature of the Vat Wisunalat is That Pathoum, Stupa of the Great Lotus or popularly known That Makmo, the Watermelon Stupa placed in the front and northeastern side of the sim. This rounded dome sets on a number of different square tiers reflects a Sinhalese influence; it is considered the only rounded dome stupa in the country.

The Royal Palace Museum also known as Ancient National Museum was built in 1904 to serve as a new residence for the monarchs of Luang Prabang. Opposite Phou Si Mountain and adjacent to the left bank of the Mekong river Royal Palace Museum is a wonderful structure of both French and Lao craft. The site of the palace was chosen so visitors could formally disembark from their river voyages and taken directly to the palace.

The palace was built of brick and stucco, the main building is a combination of French Beaux Arts and Laotian architectural ideas and motifs. The structure has two separate cruciform-style sections allied by large throne room. The walls and ceiling of the Throne room are adorned with sophisticated glass mosaic; within the room is the selection of royal paraphernalia such as elaborated swords and scabbards, as well as religious artifacts including Buddha images and mural paintings depict daily life of Luang Prabang during the old regime.

The front section of the museum serves as the main exhibition area. Its entry hall reflects the position of Buddhism in the former Lao Kingdom while the rear section of the building are five big rooms that served as monarch’s private quarters showcasing King’s and queen’s bedroom, dining room and library.

There are also numerous buildings within the palace compound including the Ballet Theater wherein traditional dances and plays of Ramayana epic are being shown, the conference hall, cultural hall, temple and the boathouse.

Mt. Phousi is Holy Mountain right at the center of the old town of Luang Prabang. In order to reach the summit of the mountain one must climb 328 stairs. The summit offers a breathtaking 360 degree view of Luang Prabang, Mekong River, Nam Khan and the surrounding countryside. Within the summit is That Comsi, a stupa in which some royal remains were buried.

Inscribed as a World Heritage on the 13th of December 2001the The temple Complex of Vat Phou endures an exceptional testimony to the culture of South-east Asia. A remarkable archeological site dating to the times of the vast Khmer Empire, Vat Phou offers a serene rural nature that has remained unchanged for a thousand years.

Situated in Champasak Province, south of Laos bordering Cambodia, about 200 km from Angkor Wat and an hour drive from Paks is the UNESCO World Heritage Site of Vat Phou and Associated Ancient Settlements within the Champasak Cultural Landscape. Champasak Cultural Landscape is a well preserved planned landscape originating in the 6th century flourishing until 15th century. It sustains a clear Hinduism vision of the relationship between nature and humanity, taking advantage of a natural axis from Phou Kao Mountain to Mekong River to lay out a geometric pattern of temples, shrines and artificial waterways. Vat Phou distinguished by its dramatic and symbolic environmental setting is considered to be most beautiful of all the Khmer temples.

The Vat Phou Temple nestles at the foot of Phou Khao Mountain and expands 1,408 m along the east-west axis, known in Sankrit as Lingaparvata or Linga Mountain which resembles the linga of the Hindu God Shiva. Archeological investigation shows that the Vat Phou Temple Complex is an important illustration of both early and classical Khmer architecture dating from 7th to 12th centuries AD. The evidence shows that by the end of 12th century the entire Phou Kao Mountain and east bank of Mekong River was explicitly laid out and constructed in a symbolic representation of the cosmology of the Hindu gods. It was a common belief of the ancient Khmer that living in a place that replicates the perfect form of the heavens would secure harmony in life.

The layout of Vat Phou imposed the placement of ancient settlements, other temples, terraces, drainage and roads. Vat Phou is built on six different terraces, connected by steps and a central walkway. On the first terrace are two huge rectangular stone palaces; the North Palace and the South Palace. These palaces are used for ceremonial functions. Within the third terrace is a natural slope with 77 steps. The topmost terrace imposed an impressive view of the entire complex and the plains to the Mekong River. Also in the terrace is a spring that flows out of the mountain. The water from the spring, emerging from the cliff about 60 meters southwest of the sanctuary was channeled along the stones canals to flow through the main sanctuary and over the linga.

Other structures within the temple complex are – the baray, a man-made reservoir used for irrigation in the ancient times; the library, in the south sanctuary; the Nandi Hall, small pavilions, brick towers, and the main shrine dedicated to God Shiva. 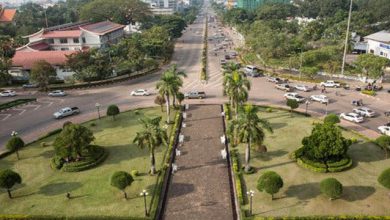