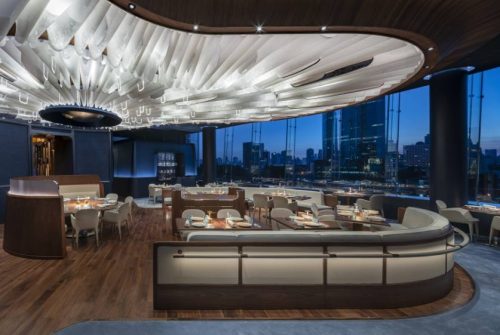 Bangkok, February 10, 2022 / TRAVELINDEX / Siam Piwat, the world’s leading retail property developer, owner and operator of world-class projects, and one of the joint owners of ICONSIAM, marked another milestone in Thailand’s retail history with Blue by Alain Ducasse, the Michelin-starred restaurant at ICONSIAM, winning the prestigious Le French Design 100 award. The awards that honor French designers for their work outside of France is another accolade on the list of international awards for Thailand, further bolstering its reputation on the global level.

– The award marks a spectacular success for ICONSIAM and Blue by Alain Ducasse, which has previously won one Michelin star for two consecutive years.
– Le French Design 100 honors 100 international creations by French designers that earn France’s design industry global recognition.
– Siam Piwat has moved beyond local competition and won a world-class award on a global stage, reinforcing its leadership as the Visionary Icon and continuing to deliver experiences beyond expectation.

The award ceremony at France’s Presidential Palace was attended by the French President Emmanuel Macron and his wife Brigitte Macron, Minister of Culture Roselyne Bachelot-Narquin, Hervé Lemoine, the head of the jury, and guest of honor Philippe Starck. At the ceremony, Jouin Manku, a leading French design agency, was honored with the Le French Design 100 award for its design for Blue By Alain Ducasse at ICONSIAM in Bangkok.

Ms. Chadatip Chutrakul, Chief Executive Officer of Siam Piwat Group and Director of ICONSIAM, said, “ICONSIAM is reinforcing its position as a destination where the best of Thailand and the best of the world converge, setting a new benchmark for the retail industry. We have made history and bolstered Thailand’s reputation by winning as many as 13 global awards across different categories. All of this is thanks to Siam Piwat’s vision and determination to inject creativity into every project and creating a perfect symphony of art, culture, and innovation through never-before-seen concepts and stories. In this endeavor, Siam Piwat has collaborated with world-renowned designers as well as Thailand’s leading designers and artists to set itself apart and consistently introduce new and extraordinary experiences to the industry.”

“We are beyond proud to have successfully earned Thailand global recognition for its real estate development capabilities. All of our projects, namely Siam Paragon, Siam Center, Siam Discovery, and ICONSIAM, have won numerous global awards over the years. Blue by Alain Ducasse is another business born out of our key philosophy to deliver ‘experiences beyond expectation’. Our intention was to invite one of the world’s best-known chefs to open a restaurant here in Thailand to deliver a first-ever experience and bolster Thailand’s position as one of the world’s top gastronomic destinations. That is why Blue by Alain Ducasse is exclusive to Thailand. We worked closely with Alain Ducasse and Jouin Manku, the French design agency that meticulously oversaw every detail of the interior design to bring the ultimate dining experience and a unique aesthetic to life.”

A vital element of ICONSIAM, Blue by Alain Ducasse is Thailand’s first-ever world-class contemporary French restaurant by legendary Alain Ducasse recognized with an astounding 21 Michelin stars. Prominently positioned on the coveted Chao Phraya riverfront with unparalleled panoramic views, the restaurant has since its opening in 2019 become a prime destination for epicures and gastronomes. Ever since, it has delivered world-class French cuisine using the finest ingredients and has been awarded one Michelin star for two consecutive years. Blue By Alain Ducasse also won the ‘Best of the Year Award’ in the fine dining category from Interior Design magazine, the most influential authority in the design industry worldwide.

The Le French Design 100 award for Blue by Alain Ducasse recognizes the spectacularly meticulous interior design of the restaurant. A design that perfectly complements the majestic vistas of the Chao Phraya River, and reflects a design philosophy that understands the importance of design and ambience for a complete dining experience. The team at Jouin Manku have designed several of Alain Ducasse’s Michelin-starred restaurants in various countries, each time with great success. In Bangkok, Jouin Manku conjured a uniquely captivating space that melds Thai and French influences into a unique space. Walnut wood and brass lamps, which draw inspiration from the intimate gardens – the bosquets – of the Palace of Versailles lend a warmth to the front lounge next to the entrance foyer. An awe-inspiring handmade pleated chandelier dominates the main dining area. With luxurious royal blue walls echoing the restaurant’s name and expansive floor-to-ceiling windows framing views of the river and city, Jouin Manku has created a magnificent stage for the contemporary French dishes and the superb wine list.

Le French Design 100 is the only design award in France that honors the international creations of French designers, and each year 100 objects and spatial design projects are selected for bringing global recognition to the French design industry. Launched in 2019, Le French Design 100 is supported by the French Ministry of Culture and sponsored by the illustrious designer Philippe Starck. The second edition was held in January 2022 under the patronage of the French President Emmanuel Macron.

The Le French Design 100 award that Jouin Manku has won for Blue by Alain Ducasse marks the first global accolade in 2022 for Siam Piwat and ICONSIAM and highlights their continued success in creating experiences beyond expectation. Over the years, ICONSIAM has garnered 13 global awards at various world-class competitions, including the Best Design of the Year at the World Retail Awards 2019 hosted by the World Retail Congress, the first prize in the Best Shopping Center category at the MAPIC Awards 2019 in Cannes, France, the 2020 VIVA Best-of-the-Best Design and Development Award, and being ranked in the top four in the Best Shopping Center Category at the MIPIM Awards 2021.

Empowering Youth as a Key to a More Sustainable Tourism