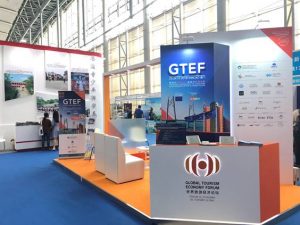 Capitalizing on the CITIE 2018 occasion, GTEF introduced the Forum as an international tourism platform that connects the Greater Bay Area, the Belt and Road countries and the rest of the world. GTEF also put forth its 2018 edition, including its Official Partner capacity in the 2018 EU-China Tourism Year (“ECTY2018”), EU as the Partner Region, and Guangdong Province as the Featured Chinese Province with a special focus on the burgeoning Guangdong-Hong Kong-Macao Greater Bay Area. At the expo, GTEF held meetings with major public and private tourism entities to exchange views, deepen mutual understanding and explore collaboration possibilities. Visitors at GTEF’s booth were engaged in interactive games that are designed to increase their understanding of the Forum and encourage them to join GTEF 2018.

GTEF 2018 will be held at MGM COTAI on October 23 and 24, under the theme “Strategic Partnership in a New Era, Rising Momentum for a Shared Future”. Featuring EU as the Partner Region and Guangdong Province as the Featured Chinese Province, GTEF 2018 will explore how collective efforts between the EU, the second-most popular destination for outbound Chinese tourists outside Asia, and the Greater Bay Area in Guangdong Province, soon-to-be the seventh largest economic bloc in the world, can create a new catalyst for global economic growth. In addition to thought-provoking panel discussions, GTEF will also offer tourism promotion, investment and cooperation opportunities through bilateral trade meetings, business matching, networking, workshops, exhibitions, etc.

About Global Tourism Economy Forum
The Global Tourism Economy Forum (GTEF) is hosted by the Secretariat for Social Affairs and Culture of the Macao SAR Government, in collaboration with World Tourism Organization (UNWTO), co-organized by the China Chamber of Tourism under the authorization of All-China Federation of Industry and Commerce (ACFIC) and coordinated by Global Tourism Economy Research Centre (GTERC). GTEF’s supporting units include the Ministry of Culture and Tourism of the People’s Republic of China (invited), All-China Federation of Industry and Commerce (ACFIC), the Liaison Office of the Central People’s Government in the Macao SAR, Office of the Commissioner of the Ministry of Foreign Affairs of the People’s Republic of China in the Macao SAR, Macao Government Tourism Office (MGTO), World Travel and Tourism Council (WTTC), Pacific Asia Travel Association (PATA), World Tourism Cities Federation (WTCF) and European Travel Commission (ETC).

Since its inception in 2012, GTEF has successfully established itself as an influential high-level cooperation platform to promote sustainable development in the global tourism industry with a focus on China. To date, GTEF had received more than 8,000 participants from 83 countries and regions, including delegations from 106 provinces and cities of Mainland China; and 437 internationally renowned speakers.

Only 5% of CEOs are Female in Tourism Worldwide